Flowers for Surrey Florists Flowers for local Delivery Talks and Workshops DIY Weddings Farm open days About Plantpassion
Watering the garden - when? and how often?
How to plant out and support your Tomato plants

Lily Beetles, - how to spot them and get rid of them 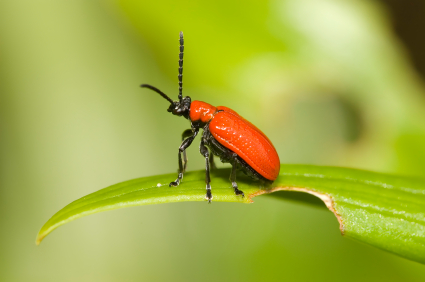 As garden pests go, the lily beetle is the brightest coloured and the most devastating to an entire crop of summer flowers.  When I started in horticulture, although being established in Surrey for years, it was a fairly new introduction to the rest of the country, and it took until the 2000's for it to spread to the north of England and Scotland.  It is now to be expected in most of the gardens of the UK, and so if you are growing lilies or daylilies (hemerocallis), then make sure you are vigilant. As a couple of lily beetles can munch holes in the leaves and flower buds of your lilies very quickly.

At this time of year, you will often see pairings of red lily beetles, - if you can get to them before they produce young then you have a better chance of getting rid of them. They are thought to only produce one lifecycle in a year.
The Eggs are found under the leaves and are tiny and orange in colour, the lavae that hatch after a week normally cover themselves with their own black muck that looks like birds' droppings, which is often found at the join between the leaf and the stem. Both of these can be washed off with water.

The adult beetles are quick at escaping but easy to spot and should be crushed on sight (no mercy here from me). There is also a  spray which can be used, - Bug clear ultra