I've had a great morning in the winter sunshine, helping a bunch of hardworking volunteers to Prune some very neglected apple trees at the Grace and Flavour community garden in Horsley. 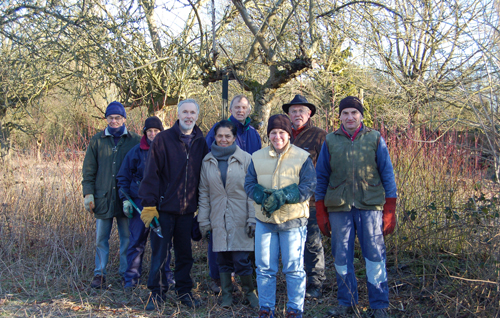 This area has been neglected for about 40 years, and the trees which were once espaliered along a central walkway, have become overgrown and congested, and are now mostly growing from the top of the original espalier tier. 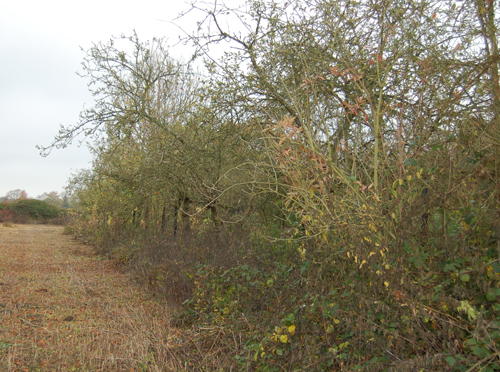 This is what we were faced with when I first saw it last autumn.

Most of the team had pruned apple trees before, but no-one admitted to being confident how to tackle these, so after going through the appropriate equipment -

Secateurs for small twigs, - Loppers for small branches, and pruning saws for most other bits

and putting together the safety ladders, we got down to some serous clearing out of dead wood.

When you prune apple trees, it encourages growth. - So too vigorous pruning will mean the the tree produces new wood and no flowers or fruit.

Apple trees really benefit from having a nice open crown, so that light and air can get in to all the branches. With these trees, in most cases, this was easily achieved by just taking away the dead wood, and then choosing to keep the strongest branch where two were crossing. 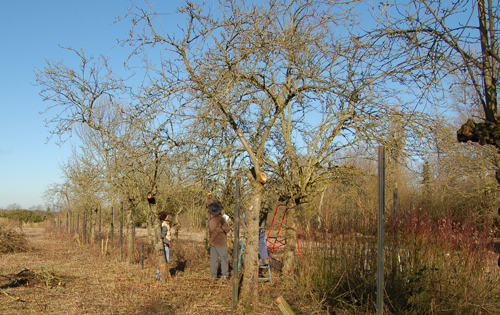 Where we did have to be bold was where branches had grown upwards vigorously.  Although we won't be able to train these back into their original espaliered form, we do want to make use of the lower branches and we don't want fruiting where branches can't be reached by ladder for harvesting. This meant taking out some very large upward growing branches.

We managed 5 trees this morning, and a huge amount of Bramble and undergrowth clearing, - this will be a fantastic centrepiece to the community vegetable garden, and i'm looking forward to when the ground is cleared of the final rubbish and ploughed so that planting can begin.

If you are in East or West Horsley, and would like to be involved in Grace and Flavour, - please look on the
website or have a look through their plans