When it comes to sowing seeds, there seem to be a huge amount of instructions on the packs.

Some need modules, some need seed trays, some want to be sown in a propagator at x degrees, and some in the ground.

Direct sowing, is where you put the seed straight into prepared soil, and just wait for the results. Both for vegetables and flowers it's the easiest route for getting large amounts of a crop. But only if the conditions are right 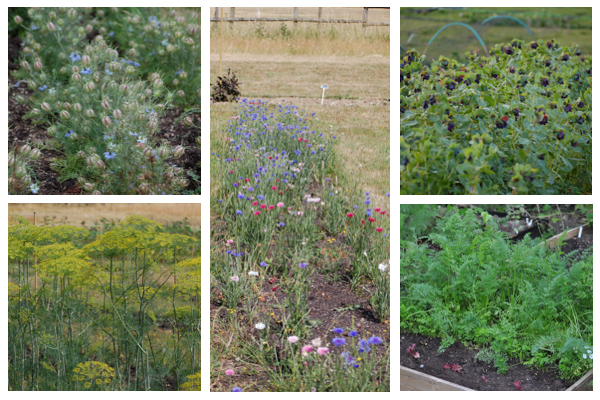 My method of sowing is to rake and bash the surface of the ground until it is fine and even, - then to use the corner of a hoe to create a V shape furrow in a straight line (it's easier to spot the seedlings and weeds if you plant in straight lines). Put the seeds from the pack into one hand (without gloves!) and use your finger and thumb from the other hand to sprinkle the seeds, or if they are big enough, place them one at a time (see reason 3 on the disadvatages below).

So what are the advantages and disadvantages of sowing direct?

Great for varieties that don't like root disturbance e.g Zinnias or have deep root systems like Dill

Quick to sow lots of seeds.

Can be done without any specialist equipment or a greenhouse, so a lot cheaper

Tiny seedlings are often bait for snails, mice, and other munching creatures.

Small seeds often get sowed too thickly and need to be thinned.

Autumn sowings can be damaged by overwinter wet and cold.

I actually love my seed sowing time in the greenhouse, - but I need to sow so many plants this year,  that some will have to be sown straight into the ground, So which have worked well for me before, and which will I be Sowing direct this year?

Vegetables - Carrots, Beetroot, Radish, Spinach, all work best for me sown direct, but there's a large slug problem at the allotment so the cucurbits will be mollycoddled in the greenhouse, - same with the beans and peas which I sow in guttering and then plant out.

Flowers - Hardy annuals, - Direct sown last Autumn were Bulplurum, and Nigella - I've not had much success with bulplurum before, - usually a tray of sowing produces a couple of plants, - but when I saw how readily they self seeded themselves on my allotment when I ignored one plant, I decided Autumn direct sowing was worth trying, and I now have a decent crop of them (of course I wish i'd grown more now). The Nigella, - has self sown itself for years in my garden sometimes getting in 2 flowerings so I followed its example and used fresh seed from last years crop and direct sowing it. - I've now got a very healthy row of Nigella which should be flowering in 2-3 weeks. - Of course I should have sown the next lot 2 weeks ago, but the bed isn't ready (see disadvantage no.1)

Then of course my fantastic bed of Cerinthe which has been in my bouquets for weeks, and which florists have loved. 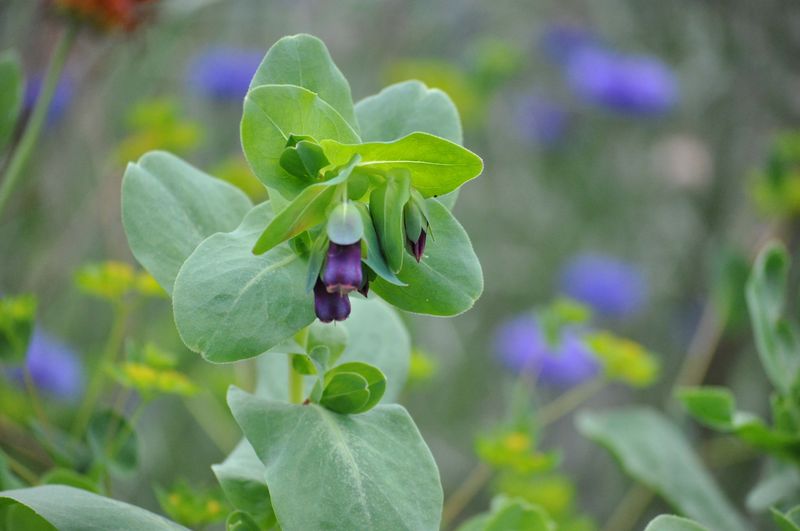 I've been growing Cerinthe for years, and I love it, and have introduced lots of others to it. - It's main feature is that it needs to grow from fresh seeds. - That's quite hard if you're buying a pack from a garden centre that has been sitting on the shelf for months. So if you manage to get some to germinate, wait until it is grown and then harvest the seeds ( when they turn from white to black and are easy to pull out) Sow them straight away and you'll get great healthy plants and 2 crops a year

The cornflowers in the top picture were direct sown, but Actually although they gave me a late crop, they didn't do nearly as well as my carefully tended module grown ones, and they didn't produce as many flowers on each plant, because they were too closely spaced. So I would direct sow them if I wanted a pretty display, but not for picking.

I asked this Question about Direct sowing to Ben Ranyard of Higgledy Garden yesterday, and he's sowing everything direct this year, and suggested I tried Ammi. I said I hadn't tried them before - but actually thinking back, the neat row of transplanted, overwintered plants that are already a foot high, were self sown seedlings from last year's crop!

When it comes to Half hardy annuals,

The Dill that I direct sowed last year, did a lot better than that which was pot grown, - not quite as tall, but just as strong and scented, and it lasted longer. - This will be repeated.

I'll also try some zinnias direct this year. - They resent root disturbance, and the money I saved on not over sowing the seeds was used on peat free root modules and compost, so i've bought extra seeds this year and i'm trying a bed direct.

But Ben's suggestion of direct sowing cosmos will be ignored by me, - I still like my greenhouse time.....