Whew what a month July has been. It's flown past but included so much, including a much needed holiday. 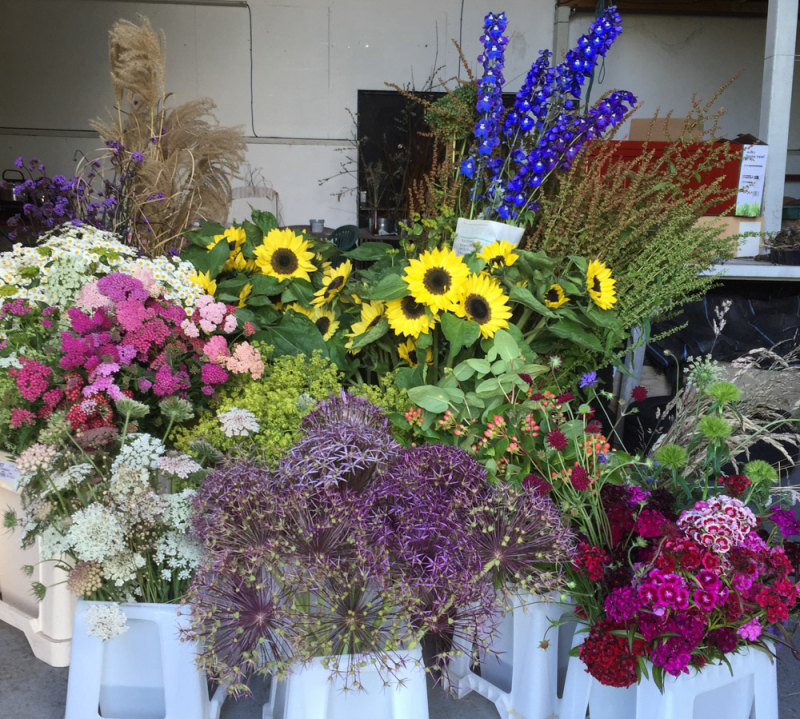 I've been involved for the last couple of years in helping to man the stand, and provide flowers. But this year, i was doing the organising and logistics for our Flowers from the Farm Floral Display.

I take my hat off to those who do events and displays on a regular basis, as it was one of the most difficult things that i've done, but our Floral Designer - Jay Archer, did an amazing job. Although with just a week to go, we were wondering whether there would be anything bright and colourful available for our Rio Carnival inspired stand, the weather improved just in time, and the photo above shows my contribution to the show.

Here's what Jay and the team came up with. A fabulous bright coloured flower wall, and a "Garden" of tin cans, oil drums and tyre planters to represent the music and theme of floats in the carnival. With Grasses and seedheads to represent the feathers and bling, we showed that British Flowers can be used for any style. Plus we got a SILVER 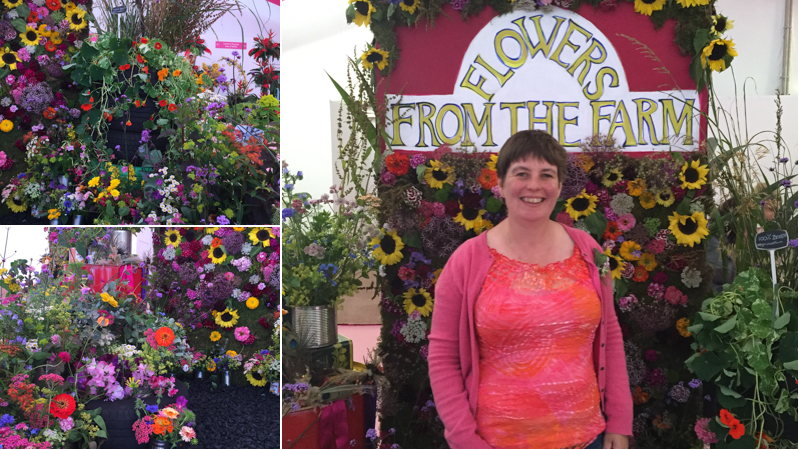 As if organising and being at Hampton Court for several days that week didn't make me busy enough, the BBC came to film at my field for Countryfile Diaries that week too.

The programmes will be shown next week, at 9.15am on BBC1. I'm likely to be on the Wednesday or Friday programme. The filming took all day, and they also interviewed one of my lovely florist customers Vanessa Birley. The production team and Margherita Taylor the presenter were extremely professional and personable, and i'm hoping it will be a really good promotion for British Flowers. (don't worry i'll let you have a link for watching it if you miss it!) I then had 10 wonderful days of holiday. I left my capable team to manage the field. Thank you to Jennifer, Dana Leigh and David, Penny, Joe, Mum and Dad and Sophie for being there to pick and water and weed (although plenty left of those to do this week!.) They followed my maps, lists, instructions, texts and emails. Plus thank you to my florists and customers for giving slightly more directions and time for them to pick and get orders ready.

Since my return, it's been pick, pick, pick. The field is overflowing with blooms. There seem to be a huge amount of florists wanting "blush" for their displays. Luckily, my flowers are trying to oblige. But it's always lovely when i'm asked to pick for a bright colour scheme as well. These went off to be made into Jam Jars at a childrens workshop. 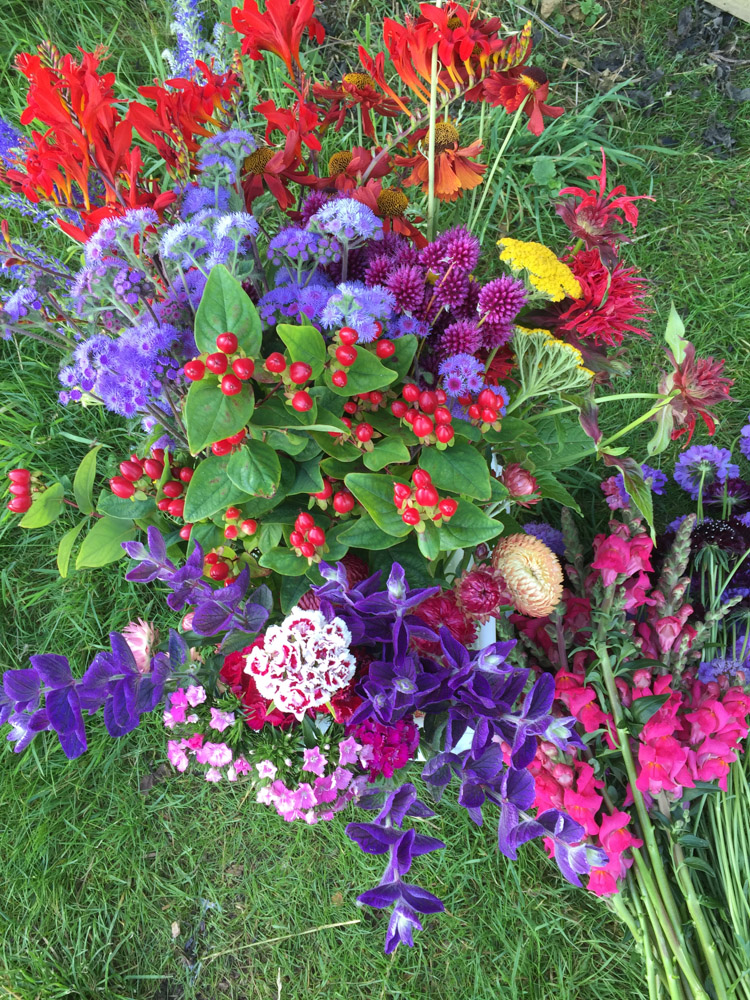 And of course we're in the middle of wedding season now, so there'll be plenty of boxes of DIY flowers leaving the barn over the coming weeks, here was one lot on Friday 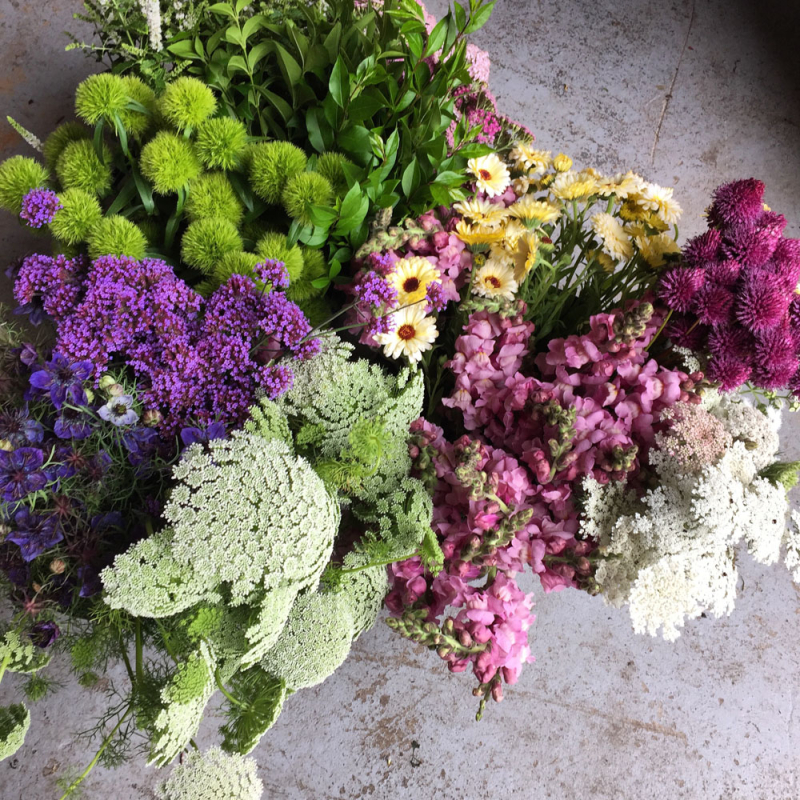 So here's to just as busy an August, i've got the rest of the day off today as the Ride London Cycle race is taking the route to my farm, maybe they'll show my flowers as they film the professionals riding up Staple Lane later.

All my flowers are cultivated. The field I grow on has only had cows or horses on it for many years, so the only thing that grows “wild” on it are natural grasses, ragweed and thistles.

However, I’m often asked for Wildflowers, or Meadow Style flowers for Weddings and party designs. Plus I work with my local Natural Burial ground, Clandon Wood, to make farewell tributes that work well with their natural, sustainable ethos. I’ve had to work out how I can cultivate flowers to have ready through the year to give that “wild” “just picked” look, while only picking flowers from my field, ensuring they are conditioned well so they last in displays rather than fade after a couple of hours, and not take from any local hedgerows.

Here’s what I include in my mixes.

May / June Weddings and parties include : cornflowers, phacelia, corncockle, foxgloves, grasses including briza media and maxima, orlaya, ammi, forget me not, nigella and aqueligias 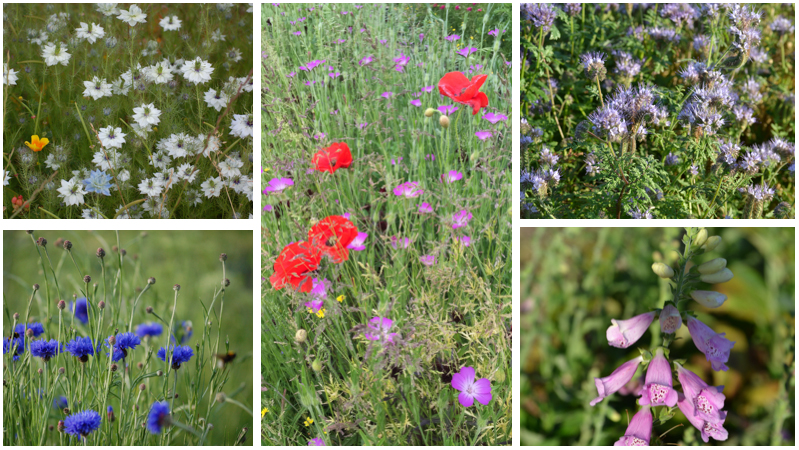 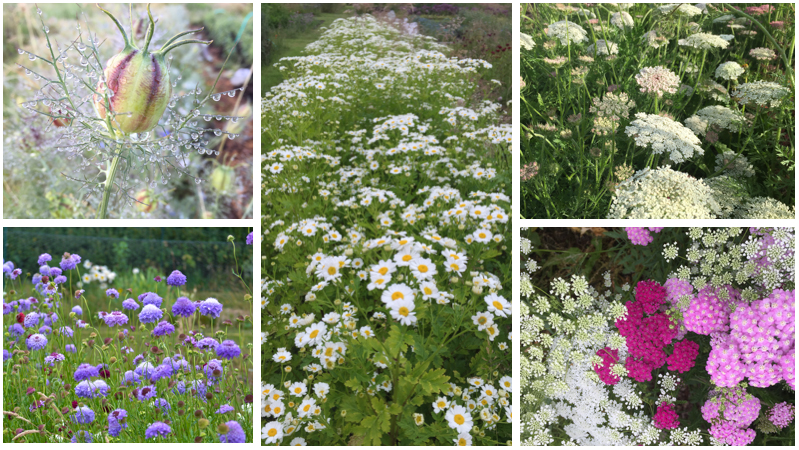 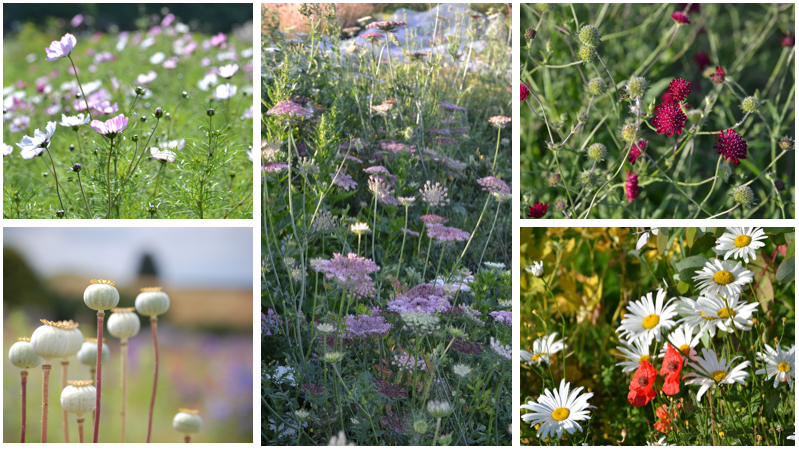 Of course the great thing about using cultivated flowers is that you have got a wider range of colours and varieties than you'd naturally have in a wildflower meadow, It means that we can create natural looking floral displays without taking from the wild, or importing any flowers.

Here are a couple of examples 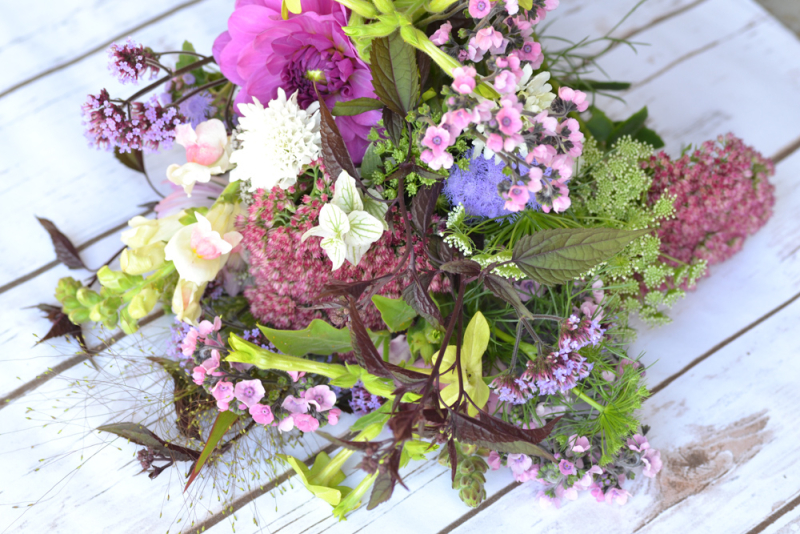 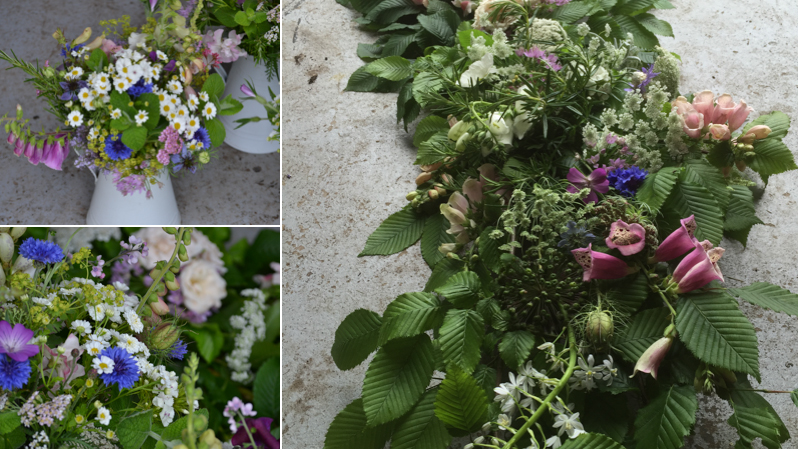