Flowers for Surrey Florists Flowers for local Delivery Talks and Workshops DIY Weddings Farm open days About Plantpassion
Sowing Hardy Annuals to get a jump start on next year.
Still Flowering on the field Mid October 2016

British Flowers and Clever Marketing to fool the public

the publicity that even i've got this year as a tiny grower - (The Telegraph in June, BBC Countryfile diaries in August and Surrey Life magazine in September plus 3 mentions in the local Surrey Advertiser don't you know....) has been fantastic and amazing, and and along with my loyal local customers who use me again and again, has meant my business is currently a whole 100% up on Turnover over last year. (and last year was a 120% up on the year before!)

When i looked at my marketing plan for this season ahead of our Advanced Growing Workshop this weekend, I realised that i'd only done 2 of the 10 items on the list. Just 2... and i still sold that many more flowers than last year.

Almost every week this summer i've received an email from a London florist or a company who wants to retail British Flowers, and needs a regular supplier of them. They already have customers absolutely keen as mustard to buy locally grown and British Provenance flowers. But i can't help them...... I'm not big enough, i've already sold all my flowers.

Imagine then if you have a large marketing budget...... You know that local, and seasonal will sell....... But you can't find enough suppliers growing in the UK who don't already have customers for all their flowers. What to do? Give up on the idea or, well fudge it, and cover it with clever marketing?

In my Facebook feed this morning was a photo, of some lovely flowers that the poster had given as a present.  Here's what she said about them.

"So these beautiful flowers all British grown delivered to your door all for £20, very impressed with quantity & quality. cant wait to order some next week for myself "
Love them Thank You  Freddie's Flowers"

They were a lovely selection, and for £20 delivered to your door - great value, but let's examine the rest. (I'd love to stick in the photo, but obviously it wasn't mine, so here's one of my most in demand Autumn Flowers at the moment) 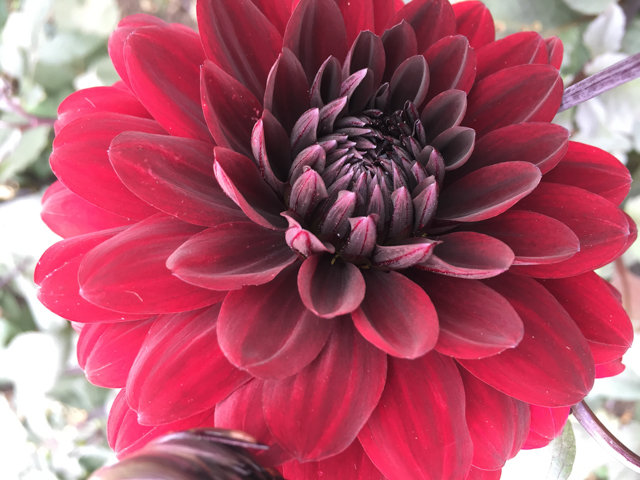 Reddy Purple are great autumn colours. Oak, Rose, Astrantia, Hypericum and Eucalyptus, well i grow all of them. So Far, i was just feeling a bit peeved that i hadn't spent more on my Facebook advertising to let people in Horsley and Clandon know about my Subscription flowers!.

My attention was then drawn to the Roses. Now there aren't many British Rose Growers of commercial cut Roses. I know as i've tried to source them. A google search of Red Freedom Roses Wholesale brings up a product profile from New Covent Garden Market about how these great Colombian / Eucadorean grown Roses are the best for Valentine's Bouquets. I couldn't find any source that was UK grown.  Then I noticed the variety of Hypericum, - mine are Magical series and i've got a similar colour to that which i used in displays and buttonholes this weekend 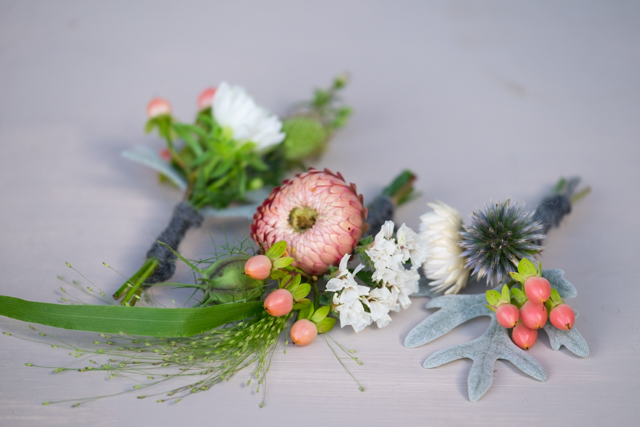 But the "Coco series" mentioned in the Bouquet Blurb are not available in this country. In fact they're only distributed as cuttings to Netherlands, Germany and Belgium, or grown on 6 farms in Africa (according to this website by the PBR holders) So they couldn't have been bought from a "local grower"  So that's 2 out of 6 ingredients at least that aren't going to be British, - Why did my Facebook poster think they were All British?

Well it's the clever marketing -

(Incidentally I thought they did, but i've gone all through the Abel and Cole website, and can't see British mentioned anywhere, please let me know if i've missed it)

So now we know Freddies background, did we assume he bought British Flowers? 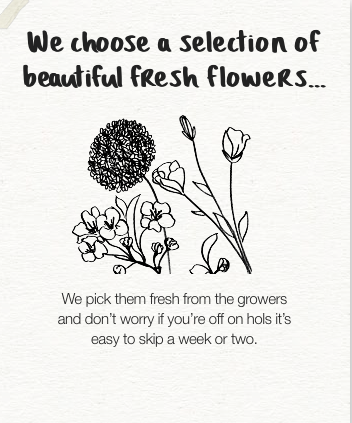 Well actually this lovely little graphic doesn't say British Specifically, but it does say they'll pick them fresh from the growers. I guess if you get on the phone to some of the largest flower farms in the world, and say "please can we have Roses, Hypericum, Astrantia and some seasonal foliage to go with them" you are picking from the growers, BUT, that isn't what the Great British Public thinks you mean.

It's not the first time i've heard of someone letting people think via Clever Marketing that the flowers they are getting are grown in this Country. There are other companies out there using "Local" and "Fresh" and stretching the majority of people's imagination on those points. Most reputable Florists and Flower mongers will use the words "Mostly British" or "British Flowers whenever possible" because the sad truth is, that we've got out of the habit of Buying flowers locally. So our Flower growers aren't big enough to cope with the biggest event companies, or mass mail order.

Our Flower industry has been in the Doldrums, and only certain types of flowers have continued to be grown in large numbers. Commercial growers in this country can't afford to grow new, untried varieties and can Only afford to grow those things that the supermarkets have "preordered".  They may sell millions of stems, but at such small margins that there hasn't been much money to reinvest. Plant trials in this country, which are not supported by any government money only concentrate on those supermarket varieties, and British Flower sales only account for between 10 and 15% of sales in this country.

It's ONLY the smaller growers, like me (and other members of Flowers from the Farm) that are able to sell Only British Flowers All year round. Because i'm small i can assess My 280 different varieties and add some new ones to trail every year to find different things for my local market of loyal buyers, whether they be florists, subscription customers, event organisers or brides.

Obviously my marketing has to get cleverer to let everyone know that.

Oooo this is really interesting! I like buying British wherever possible - what an awful thought that we're getting conned into thinking we are when we're not!

It must be hard to grow new varieties when you know old favorites will sell. How do you convince buyers to try something new? Not easy. We like the familiar.

Great post Claire - the consumer needs to be educated about where their products are sourced from. Words can be so easily misinterpreted! Thanks for posting.