We had Dave come and join us to do some work experience last week. He's been a builder, not a gardener, but would like to try his hand at this Flower farming lark....

His biggest issue i think (well actually i can think of a few, but we'll keep it simple for this blog) is learning what's a plant and what's a weed.

Identifying your seedlings, - particularly those that are likely to sow themselves on your field is really important for a flower farmer, and actually any gardener who likes freebies. 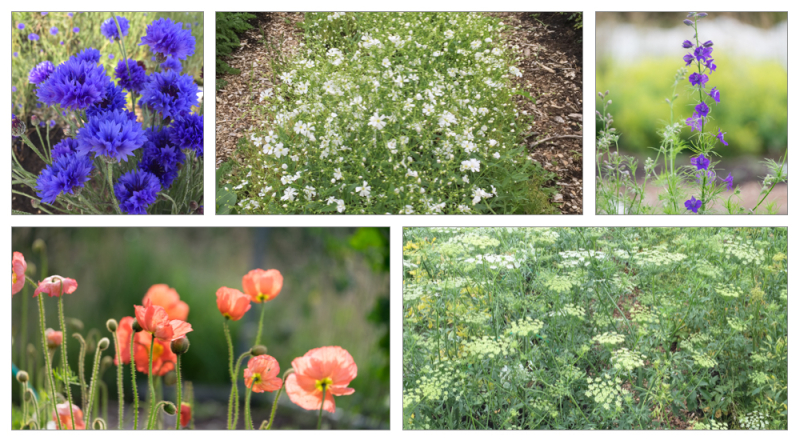 So I thought i'd show you a few that it would be good to know how to identify.

For me, the annual larkspur is a god-send because Delphiniums hate my field. To this point in time, despite sowing seed every year, and potting on and cosetting many delphinium plants over the last few 4 seasons, the stems i've sold is still only in double digits. Whereas Larkspur, although still somewhat difficult to get round the joint enemies of slugs and rabbits, do make it with reasonable regularity on my field. With many stems produced per plant, and amazing height of flowers, it's worth trying. Here at Hill top farm, Autumn sown seeds and self sown seeds are potted up, and sheltered in the polytunnel until early spring. Here's what you are looking for if you want to do the same. 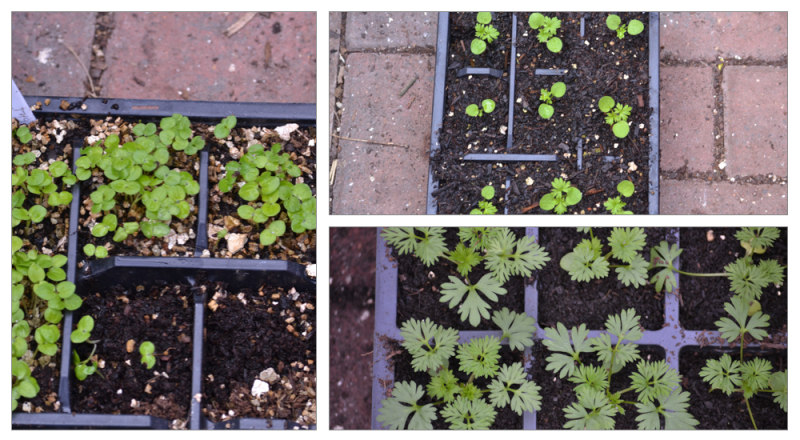 Now Ammi is an amazing filler flower. Strong stems, early season flowers, and lots and lots of stems per plants. It doesn't like root disturbance, so you need to know what it looks like when it's just a couple of leaves if you want to transplant it. Try and get it when it has just 2 real leaves, and transplant it into deep plug trays. These 54's are an excellent size to get a decent rootball to go straight out into field beds in late October. By February, the plants will look like the bottom picture. 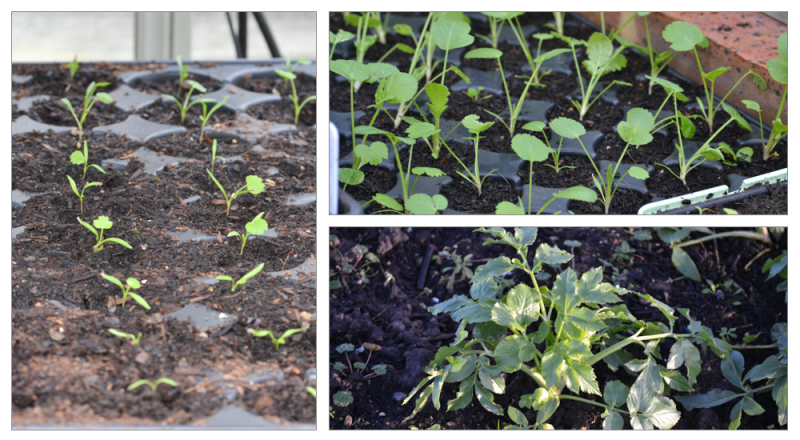 Obviously a British Cut Flower field or patch can't be without Cornflowers, and as they were the locally grown crop that was transported to London for gentleman's buttonholes, i wouldn't be without them. - It helps then to know what the seedlings look like. I try and transplant my cornflowers when they are just 2 true leaves (like the seedling sample on the right in the first photo, when it only has a small amount of root, and is easy to transplant) If you don't pick every single cornflower then you are likely to get self sown seedlings (like in the 2nd photo in amongst the Sweet Williams - and other weeds!) But if you get them transplanted quickly, then autumn sown seedlings will look like the bottom photo by February. Strong rosette seedlings that will produce 20 or 30 flower stems from each plant. 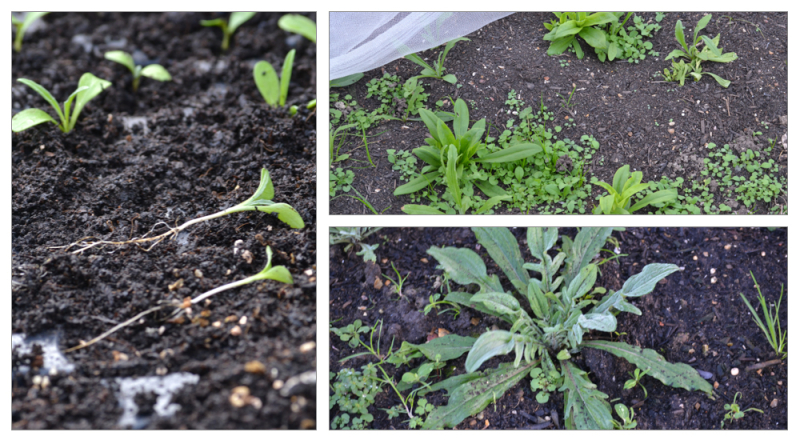 This one self sows itself better than if it is sown. - i've found it's easier to let it do the seedling stage itself, then pot it up to avoid it being slug bait, and plant it back out when it's bigger and stronger. - If you want to sow this one from packet seed, cover it with black plastic for 3 weeks to exclude light, taking the cover off as soon as it germinated. It looks very similar to Ammi seedlings when it's just 2 leaves, that's why there's the first 3 plants of bulplurum in this tray. (Note to self, don't plant in adjacent beds!) 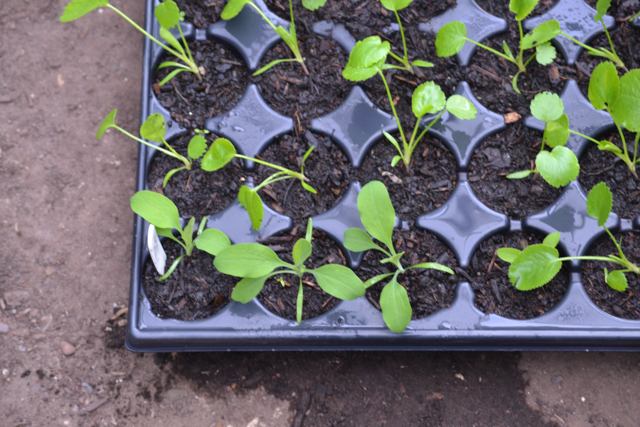 Although i love poppy seed heads, the poppies that drive my florists bonkers, are the Iceland poppies. Their early season colours and bendy stems mean that they are snapped out of my hands as quickly as i can pick them. This season, as well as the amazing colours i've grown in the past, i've also got the Colibri varieties. - here's what they look like as seedlings. 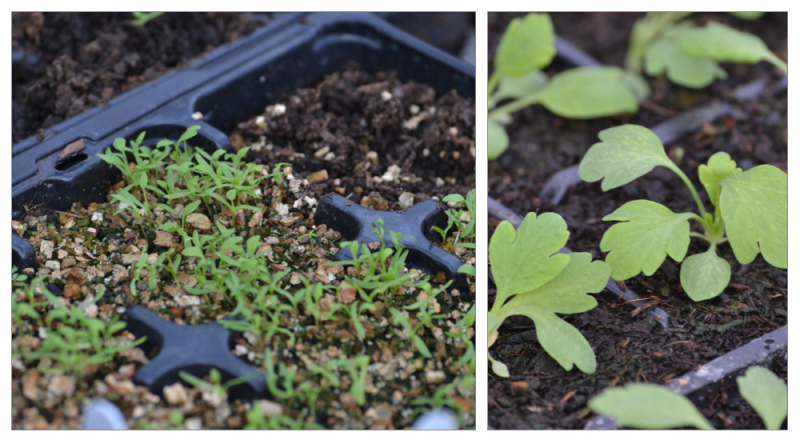 My germination rates of the expensive Italian seeds were amazing, so i'm hoping i find room for and manage to grow every single one of them to full flowering (Dave's building skills may be used for some extra gro-tunnels at this rate)

And last but not least

i'm growing 3 varieties of Gypsophila this year. Covent Garden, which i've grown for the last 3 years, Kermesina, a pink variety that i saw at Green and Gorgeous this year, and Monarch White - an unknown quantity that i got a packet of seeds for and well......... what's a seed addict to do. 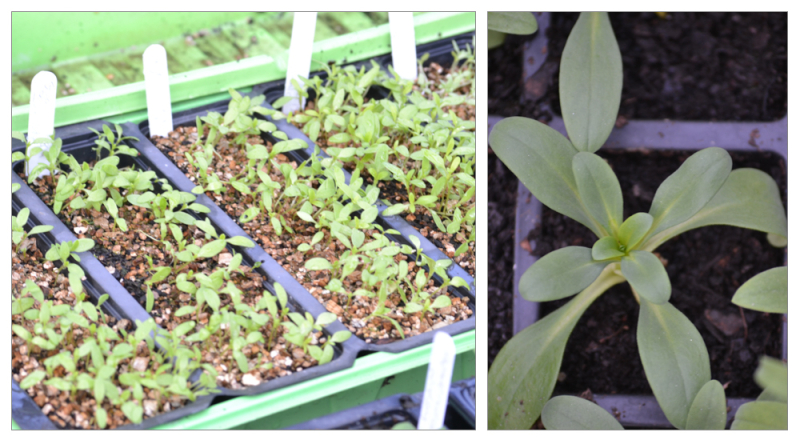