Eggs for Breakfast - Rescue chickens to the rescue 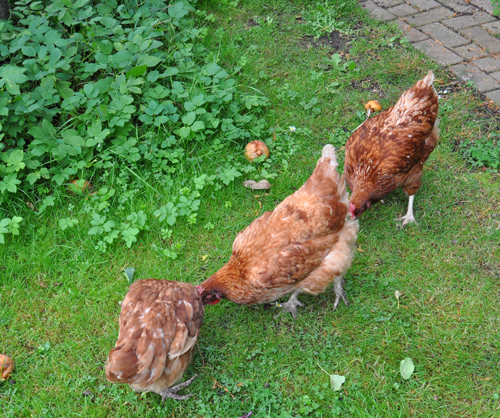 8 weeks ago at the beginning of July, we got 3 new rescue chickens. At that point they had been out of the battery cages about 1 weeks, and came to us looking rather bald, - I wrote about them here.

Now after 8 weeks of attention from us, and friends while we were on holiday, (thanks chicken foster parents :) they are fully feathered, and all giving us eggs every day, - which is just in time for the beginning of a new school term so that I can make boiled eggs, and eggy bread for breakfast each day.

They are also now willing to take slugs from me to feed on, but i've still got to get them liking ground elder, - the patch under my apple tree now needs some serious attention.

Late last night just as we were going up to bed, My husband went to close up the chickens as we've done for the last year. - The only trouble was that a Fox had got there before him, and our lovely rescue chickens Sally and Princess Leia were no more.

We live in a semi rural area, and the houses that back onto us face a field and a farm, so it's hardly suprising that there are foxes around, we just hoped that locking them in at night, and only letting them into their run while we were at home would save them.

When I was told last night, I wasn't that upset, - life goes on kind of thing, and it isn't as if they were house pets, that got cuddled, - but today as I can't work because of the snow, and as I look out over the garden at their empty run, I realise how much they've been a part of my and the garden's life this year. -empty coop this morning in the snow :(

At the beginning of November last year, we received the Chicube run that we'd ordered at the Malvern Show, and installed our Rescue chickens in it. I wrote about it here

They obviously liked being Free range rather than kept in a cage, and produced the first egg for us just 2 weeks later on my Birthday. Since then they have averaged about 10 eggs a week between the 2 of them.

Although getting eggs has been fantastic, - for me as a gardener, that hasn't been the greatest benefit. For me, Having to go out into the garden every morning and evening to feed them has meant that i've had to walk past my greenhouse, and vegetable bed. It's meant that I can't ignore if plants need watering, and the odd weed or 2 has been removed at each pass by. It's meant that my compost bin has had a regular weekly top up of high quality nitrogen rich fertiliser, it's meant that lots of my scraps don't go to landfill or even in the food waste bin. on top of this, it's meant that every slug and snail i've found has been thoughrly enjoyed by 2 chickens keen to recycle my garden pests.

So I shall remember Sally and Princess Leia with a smile, and hope that they Rest in Peace, - and now i'm off to find some replacements, so that I have an excuse to go down the garden, and my veg patch and greenhouse won't get neglected 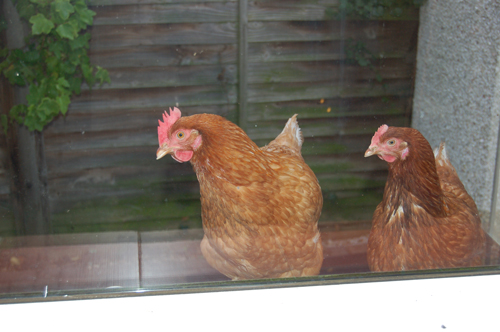 Chickens in the garden

Way back last October, I introduced you to Sally and Princess Leia, my new rescue chickens. At the time, they were rather short of feathers ,and didn't like us getting anywhere near them. They immediately set about fertilising our lawn, like Rebecca and Emma and Robin had told me they would, and pretty soon became part of the family, - laying their first eggs within 3 weeks. So how have they fared over the last 7 months?

Well if anyone had told me i'd have fallen in love with some extremely stupid chickens i'd have laughed at them long and loud, but now... after 6 months of fantastic over eating of freshly laid eggs, i'm loving having someone to throw slugs to, (that appreciates them) I enjoy an excuse to go out in the garden every morning, and evening, and the greenhouse gets opened and closed when it should be.

Over the winter, they were allowed the run of the garden whenever we were in the house, and soon regained all their feathers. 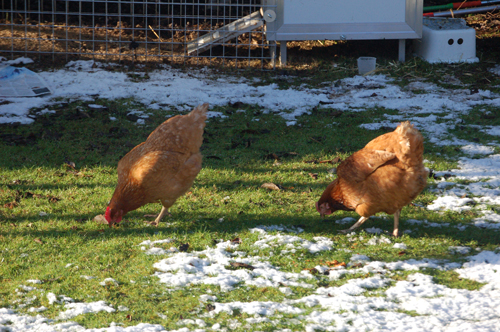 but by spring, I was tired of them eating my uncovered lettuces and chasing them back to the patch of ground elder that I wanted gone, so we built them a large run across the bottom of the garden. 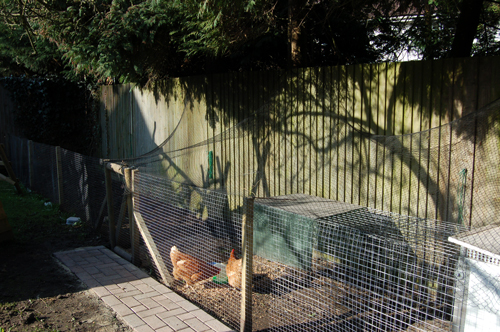 - Unfortunately we soon discovered that they liked jumping up onto the gate, and out into the garden, - so we've had to employ all kinds of discouragement to stop them escaping, - the most effective being some netting over the areas where they can jump up and out. They are only let out of their pen when we are around the house, so that they don't run the risk of meeting Mr (or Mrs) Fox, and we make sure that as well as their food, they get the pick of the excess green crops and weeds from the garden.

My lettuces are practically slug free - yes that could be down to a dry spring, or it could be that every time I see a slug, I get to give it to an appreciative audience, and the population of molluscs is kept to a minimum.

My compost has an addition every week of some very rich chicken manure (and newspaper), and seems to be doing very well on it.

Now I know that we are lucky that they have been laying 12 eggs a week between them, and that at some point they will become just pet chickens rather than a healthy addition to my food list each week (although William seems to be quite happy to eat them when the time comes!) but i'm hoping that is in some part due to the fact that they are happy in our garden, that we don't stress them, that they get to have a run about, - if not quite free range, then at least with plenty of room, a bit of sun and shade, and regular food and water. 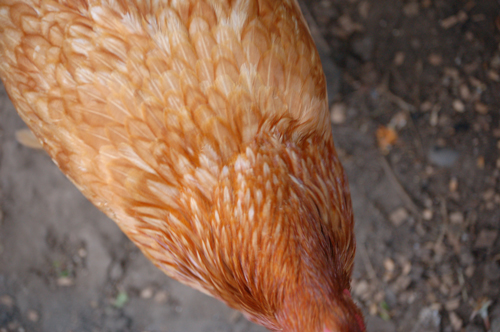 They don't like their picture being taken any more, and can move fast when food might be on offer, but they no longer cower when we go to pick them up, and are quite happy to be picked up and moved about by us, (even a loving 6 year old)

i've talked to lots of people over the last 9 months about keeping chickens (it's a real conversation piece at dinner!)  - I havn't told them that it's easy, - it does take time every morning and evening to make sure that they are fed watered and in the right place. - They do poop all over the place if allowed to, - yes even in their food and water bowls.

The Eggs do make up for it in a lot of ways, - so I don't have to feel totally guilty when I ask friends to look after them when we're away. Would I consider a garden without chickens at the moment, - No way!, they are pets, the eggs are very good additions to my menu each week, and they are great pest eaters, so at the moment, the chickens stay.

We have our first egg!

Our rescue chickens Sally and Princess Leia have been with us for about a month now. - They both have all their feathers back and are getting bolder when we let them free range the garden (my corn salad has all been eaten). This morning we were rewarded with our first egg.

I don't know which one laid it, I think probably Sally as she has been out of "captivity" for longer, and she was very excited when I picked up the egg and gave it to William 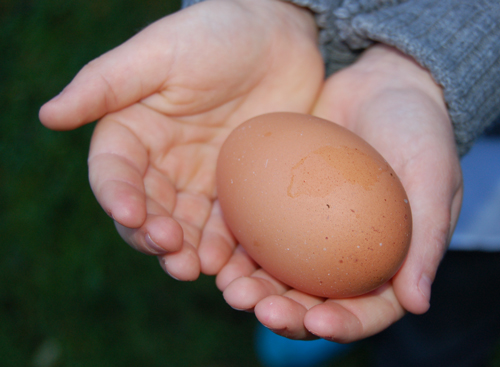 it was quite a big egg, and risking being late for school, we immediatly turned it into a boiled egg to go with toast soldiers.

I was going to do a photo of the egg and yolk waiting to be eaten, but it was so delicious I forgot 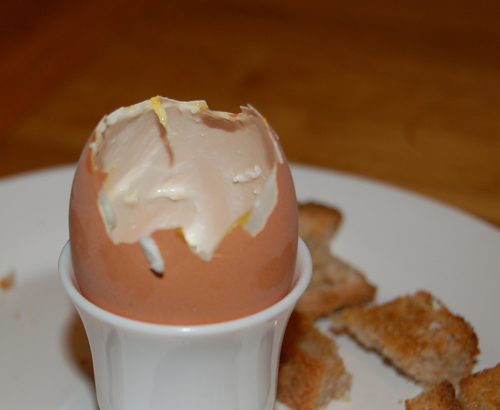 New additions to the family (or - chickens in the garden)

After many months of debating, and a lot of researching, we finally have our chickens.

Sally and Princess Leia (yes my 5 yr old's choice of names, Cars and Starwars being favourite movies) are now installed in our back garden in their fox proof coop and run. 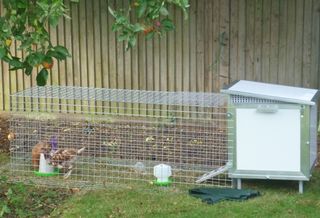 They are rescue chickens, - which means that after a year of laying eggs for a farmer, they were about to  go into their seasonal moult. - little hen rescue are a not for profit organisation that collects up hens that would be disposed of because they were not laying, and finds new homes for them as free range egg laying pets.